D1GP lost a veteran and drifting fans all over the world mourns the passing of the friendly and humble Atsushi Kuroi. RIP. You will be missed.

"A very sad day in the world drifting community today as D1GP Japan driver Atsushi Kuroi was killed in a motorcycle accident in Japan. From 2001 he campaigned a Nissan Silvia PS13 and a Nissan 180sx RPS13 in his history with the series. Above is a picture of his car in the pits at the 2008 Fuji Speedway event with his sponsors River Side and Toyo Tires that I took on my last visit to Japan. His greatest moment in D1 Grand Prix history was taking home a victory at Fuji Speedway in 2007 which would be the only D1 victory of his career."

"Some very sad news out of Japan today. Veteran D1 driver Atsushi Kuroi has passed away after injuries sustained in a motorcycle accident. Kuroi was popular not just in Japan, but in all the countries where he drove. Anyone who's seen him drive knows the kind of talent this man had behind the wheel of his Nissan One-Via. Besides being known as a great driver, he also made a name for himself with his River Side tuning shop in the Osaka area.

I feel very fortunate having the opportunity to see him in both the US and Japan.

Our thoughts are with his family and his friends. 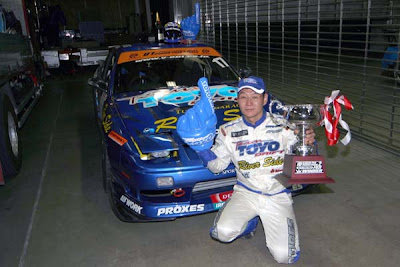 Atsushi Kuroi (黒井敦史, 30 March 1969 – 1 February 2010, Osaka) was a Japanese professional drifting driver, that competed in the D1 Grand Prix series for Team Toyo with River Side. Sadly he died on the 1st of February 2010 during the evening due to a motorcycle accident.

The entire Team Toyo Malaysia would like to express our condolences to Kuroi-san family and Team Toyo Japan. It is a great lost to all of us. Kuroi-san, is a very humble person and cheerful during our past few meetings. It is sad now that we lost him and he will always be remembered.

He loved cars from and early age and dreamed of getting his license, when he did the first car he got was a four wheel drive as he was into WRC at the time. He enjoyed dirt driving but ran out of money for repairs to his car so he bought a Nissan Silvia (S13) and turned to drifting. He practiced a lot but as he mainly did it alone he couldn’t tell whether he was any good, so he studied the drift bible and some other books on drifting to try to improve. Though he never knew whether he was any good until he began competing against other people. He was the manager of the River Side Tuning Garage in the Osaka prefecture, so he sponsored himself.

He has been competing in the D1 Grand Prix series since it began in 2001. He has always used a Nissan Silvia (S13) as he loves the way they drift. The Silvias he uses in the D1GP are not usual, his old one had an RB26 from a Nissan Skyline GT-R and his current car has a 2JZ from a Toyota Supra, as he likes the bigger displacement engines. Recently he has been doing well though his car is not always reliable,and in 2007 he achieved his first victory.

In memory of Atsushi Kuroi...

I had the chance to shoot Atsushi Kuroi san in action during the Team Toyo APDO Malaysia 2008. His skills were extraordinary and his crazy speed and angles had the crowd going wild everytime he took to the track. He was a very friendly and humble person and would always smile for the cameras. Even after the event and he was extremely exhausted due to the hot weather, he never stopped smiling and continued to take pictures with his fans. His passing is a huge loss to D1GP and also the drifting fans all over the world. Rest In Peace and my deepest condolences to the family. I will miss his crazy entry.For those drift fans,check out noriyaro's blog ,he featured a touching tribute at the end of the post