Earlier this week, I had the privilege to be invited by Lamborghini Kuala Lumpur to have a super exclusive preview of the cars on display, including of course the latest Bull in the stable: the Aventador LP700-4. Unveiled at the Geneva Motor Show earlier this year, the Aventador is the replacement for the out-going Murciélago model. As can be expected, this new model once again shares it's namesake with a legendary, trophy winning fighter bull.

Keys to the throne...

The Aventador is truly a beautiful thing. Getting inside was a dramatic affair; you open the doors that swing upwards, and you have to deftly slide your posterior into the seats. Inside, you're cocooned by a sumptuous display of leather, carbonfibre and aluminium. Sitting position is perfect, and snug. It is difficult not to feel like you're at the top of the world, even though in reality, your bum is pretty close to the ground. The cockpit - dials, gauges, buttons, start-button take inspiration from a fighter jet, and gives the impression you are about to engage in battle, every time you pull out onto the road.

The Aventador having an upskirt moment

Interesting to note is the use of Lamborghini's new 6.5-litre V12 engine. Dubbed as the L539, it will replace the first V12 produced by the company which that appeared in the Lamborghini Miura. Official performance figures are staggering to say the least; 700PS @ 8250rpm, 690Nm @ 5500rpm, zerotohundred in 2.9secs, with top speed marked at 349km/h. When Top Gear tested the Aventador on the Top Gear Test Track, the Aventador managed to secure itself as the third fastest vehicle, besting even the Bugatti Veyron Super Sport.

As I was not allowed a test drive of this beautiful machine, you will have to settle for this short video that I was able to take. Let's see if I can work something out in the future.

Special thanks to Lamborghini Kuala Lumpur for having us over to take some super exclusive shots of the Aventador.

Nice write up bro...and awesome car...you are so lucky..
Expand signature
There's an ultra thin line between commenting like an adult or a 8 yo dick/ass/douchebag on forum.

The aventador has a digital dash like the LFA? Wah..

Pity you weren't allowed a spin in the car. But starting and stopping the car so many times whilst stationary is ok?
Expand signature
www.racenotrice.com

very very nice. to be one of the few to get in to the LP700 is like having dinner with a supermodel even if you don't get to drive it.

the digital gauge is insane and the revs just seem silky and effortless. was waiting for the rev to go pass 6 but looks like it limits it in N. Also must be pretty hard to choose between displaying the speedo or the tacho.

wow...the rev hit limiter in no time....no1der they sort out with digital ones...
Expand signature

Iszo, no official test drives have yet to be arranged in Malaysia as far as I know. This event was really to display the range of Lamborghinis for the Golf Tournament there. Lamborghini Kuala Lumpur decided to call some folks along (three - how shall I put this... non-prospective customers) to have a look at the LP700 and take some pictures. Of course, we were all handed the keys to take the videos that we wanted.

I don't know why you've disliked my posts, but I hope you're kidding about me stealing my own videos. All pictures, and videos that I have put up were taken by myself.
Expand signature

never seen one in a flesh yet
Expand signature 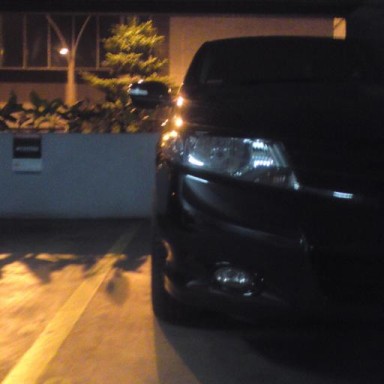 If I have the money I would definitely get this car just for the Start/Stop Engine button..
I mean how often would you get to flick such a cool flap and let the engine breathe..
Unless of course you're a fighter jet pilot..
You must log in or register to reply here.
Share:
Facebook Twitter Reddit WhatsApp Email Link